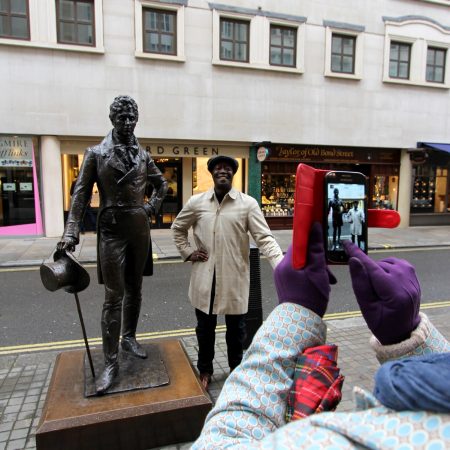 When most Londoners think of a London region perfect for a literary tour, they think of Bloomsbury, Southwark, Soho or Chelsea. They don’t think of St James’s for two basic reasons. One, they forget about the fabulous London Library – or they’ve never heard it. Two, they associate St James’s mainly with gentlemen’s clubs and fine menswear shops, and they don’t associate the men who frequented these places with those who have written some of Britain’s most loved poems and novels. Writers are supposed to be poor, after all, stuck in a garret and all that.

Putting the London Library to one side, I would like to address the issue of English male writers and their taste for what many gents consider the finer things of life, the rare antiques and old paintings, the lightest cotton shirts, the most piquant cigars and wine, that sort of thing. In the case of writers, this taste is naturally assisted in its development by a bestseller or two, but not necessarily. We need to remember the great importance of St James’s in Britain’s history. For all of the 19th and much of the 20th centuries, its clubs basically held together the Establishment when the Establishment’s members were staying in London.

Middle-class Englishmen who were not so established were expected to desire to be — and to desire to enjoy all the amenities of club life plus a few of the nice things available in St James’s galleries and men’s shops. As passages from Point Counterpoint (1928) and Decline and Fall (1928) make clear, young novelists like Aldous Huxley and Evelyn Waugh relished drinking and dining in the same grand rooms that welcomed judges, bankers and MP’s. Here they tasted not only fine things but tasted them shoulder to shoulder with their august betters. In Decline and Fall, Dr Fagan makes the deplorable Grimes come to the realisation that, “I suppose I am a pretty coarse sort of chap. I don’t know anything about art, and I haven’t met any grand people, and I don’t go to a good tailor, and all that. I’m not what he calls ‘out of the top drawer’.” Both Waugh and Huxley try to have it both ways in print, mixing admiration for the toffs’ world with quizzical irony. However, in life, neither man would have passed up opportunities to indulge his intellect and his senses in the many charms of St James’s.

Several of these attractions have likewise become dear to my heart, though I’m not a man and have no desire to join a St James’s club. I adore the shops that sell classical, tailored, high-quality items, especially the older shops, with their dark woodwork, rich leathers, colourful silks and soft cashmeres. Indeed I love Jermyn Street’s shops so much that I created my first tour in 2014 to give people who weren’t ready to buy such items the excuse to go into places like Floris (perfumes), Paxton & Whitfield (cheeses), Foster & Son (shoes), Harvie & Hudson (colourful jackets), and Turnbull & Asser (shirts and ties). I studied the histories of each Aladdin’s cave of merchandise, and, as I did, a list of celebrated historical figures who visited these shops began to emerge, several of whom were famous writers.

Perhaps a bit weirdly, I like to imagine these famous writers buying things. One of my mental images is of Oscar Wilde swanning into Floris. He might have worn a long cape and perhaps a derby or a silk top hat that he would have doffed as he entered, pausing to sniff the heavily scented air with approval at its signature mixture of citrus and floral. Then, taking off his gloves and perhaps revealing a bejewelled hand, he would request his usual fragrance: Malmaison. Nowadays, Floris sells its replacement, Malmaison Encore, close enough to Oscar’s to let you feel you know the great man just that little bit better.

Another mental image is of Noel Coward walking briskly into Turnbull & Asser to inspect their latest scarves and dressing gowns. His attention to detail would have been vigilant and his satisfaction at another flattering purchase immense. James Sherwood in his wonderful history of Turnbull & Asser recounts the “company lore” that when Coward was cut by the Prince of Wales at Jermyn Street’s Hawes & Curtis – after playing the piano to the Prince’s ukulele late the previous night — Coward was “sufficiently piqued to turn his heels toward Turnbull & Asser”, where he became a loyal customer.

We have quite a few stories of writers and their entertaining buying habits. To hear them and much more, come along on our St James’s Jaunt.