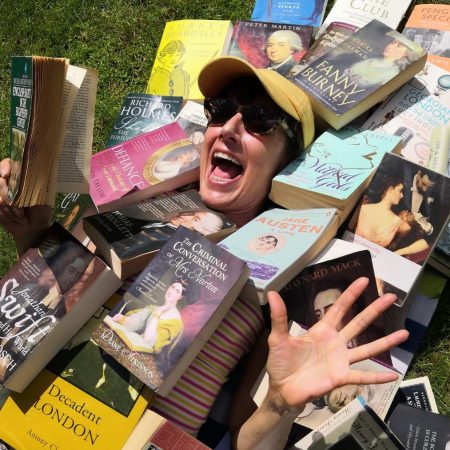 Spring 2021 has finally come and with it the promise that we can meet again, group together again, especially outdoors, which is what our literary tours are all about. We are so excited to get going, but it feels like we should take a moment to reflect here not on what this year has taken from us, but rather on what it has given to us, particularly as readers.

Faced with all this time at home over the last year, I eventually realised that I must stop reading about WW2 spies (ask me in person about this growing obsession) and instead plunge into research for our second literary tour. So, after a long chat with Mike that settled on tackling Mayfair before Soho (though I can’t remember now the reasoning behind it), I dived into the project, ordered dozens of books on every writer that had swept down Bond Street between 1725 and 1955, never quite knowing how I was going to find space for all the books. But as we couldn’t go to the British Library during a pandemic, I simply had to buy them.

Satisfying my lust for books in brown paper packages was never going to be easy. Many times, as I was about to press the BUY NOW button, did I feel a pang that the volume that was soon to drop on my doorstep should not be selling so cheaply, and yet I wouldn’t have dared to purchase so many books if they had been priced in double digits. That is the strange, mixed blessing of now — when books are often seen as just pieces of decoration, stuck on shelves to make shops and cafes look a bit classy; when academics have their new books priced so high that no one will buy them except libraries; and when so many great old books are being undersold because almost no one wants them. At present we can only buy the old books with gratitude that we can buy them so cheaply, and then sing their praises in every quarter and forum that we can.

As the books accumulated over lockdown in massive stacks on top of my bookshelves, I had to keep asking, how long is this research for Tour 2 going to take? What have I let myself in for? You see, the first hard decision to make when creating a tour is which writers to include. For our first tour, the St. James’s Jaunt, Mike argued that we should confine them within the limited time period of the early 20th century and I agreed — but I was afraid that my beloved Samuel Johnson and William Makepeace Thackeray, who both kicked their heels mightily around St. James’s, might not get their day in the sun. (I’m still concerned about this, and I’m determined that there must be another St. James’s tour). So I thought, with the Mayfair tour, why not include twice as many writers, maybe make it five hours long and divide it in two parts — make it range from the days of the Bluestockings to those of Nancy Mitford?

Completely mad, I now see (yet again), but I can honestly say I tried . . . and found myself guzzling information on Henry James and the history of the Bodley Head, then puzzling over the couplets of Alexander Pope and the dark life of Jonathan Swift, then going fuzzy-brained over the political machinations of Benjamin Disraeli and Caroline Norton. It was fun to see all the connections — to learn that Swift mattered to Disraeli just as Tobias Smollett mattered to George Eliot. Indeed, I now remember why we plonked for Mayfair over Soho; it was in reading up on James Bond for our Ian Fleming section of the St James’s Jaunt that we came across the passage from On Her Majesty’s Secret Service when Griffon Or tantalises Bond with the possibility that his ancestry is connected somehow with the Sir Thomas Bond for whom Bond Street is named:

The Street was built in 1686 and its association with famous British folk are, of course, well known. The first Duke of St Albans, son of Nell Gwyn, lived here, as did Laurence Stern. Boswell’s famous dinner party took place there, with Johnson, Reynolds, Goldsmith and Garrick being present. Dean Swift and Canning were residents at different times, and it is intriguing to recall that while Lord Nelson lived at number 141, Lady Hamilton lived at number 145. And this, my dear sir, is the great thoroughfare of which you bear the name! . . . This is the very warp and woof of history, my dear Commander Bond.

Ian Fleming, the book collector — how few people know of him? We loved the idea of James Bond’s creator reading Boswell’s life of Samuel Johnson and wondering about David Garrick’s acting and Lord Nelson’s loving of Lady Hamilton. We loved as well fathoming the impossible influences that this literary history has had on contemporary writers and ourselves. But enough of fathoming, I needed to read and find concrete connections between all these writers. Along with sending off for writers’ major works, I ordered biographies about every one of them, and sometimes second biographies, and sometimes books about friendship groups of writers or books solely about the writers’ love lives.  The months went by, with me diligently taking umpteen files of notes and creating a single-spaced chronology of facts that now stands at 80 pages and counting.

Gradually, I came to see that no tourist would ever put up with a tour about 30 writers that last 5 hours, not simply because of the ridiculous amount of information and length, but because the reigning emotions of the different eras were simply too various.  One minute you’d be expected to sympathise with 18c writers fleeing mobs and fighting duels, and the next with 19c writers getting pilloried for having multiple gay lovers, and then with 20c writers conducting undangerous liaisons that often left them lonely though successful. Only weeks before lockdown ended did I finally see that we had to cast our lot with the swords and lace of the eighteenth century to create Tour 2, and postpone all that gay sex until Tour 3 (with the exception of Horatio Walpole, thank goodness).

Jeremy Lewis in his introduction to Tobias Smollett spoke of his affection for the rough-and-tumble world of the eighteenth century — the “crowded, raucous streets of Hogarthian London” and its continual sense of risk from emptying chamberpots, pickpockets and runaway carts —  and I’ve come to see how very right Lewis was. The discomforts, harshness, diseases and short lives are sewn into every word of Smollett’s Roderick Random and John Gay’s Beggar’s Opera, and explain so well the lordly attempts at order made by Pope and Johnson, with their razor-sharp couplets and dichotomies.  Even to give the illusion of order amidst such chaos would have been incredibly impressive. The eighteenth century had drawn me in and there was no escape, except to come up for air with Austen,  Shelley and Byron.

Resolving to concentrate on Hanoverian London is, I think, a bit of a brave step for me. When I was in graduate school, I had focused on the Romantic poets and found myself eventually writing a biography of the early life of the poet Letitia Landon (1802-38) for my PhD dissertation. During all those years of study, I think I was simply in a kind of Romantic reaction against what I felt was a too authoritarian, conservative, rational eighteenth century. In my 20s, I wanted nothing but revolutionary passionate ideals, and I just didn’t understand how very emotionally turbulent the likes of Laurence Sterne with his Sentimental Journey, and Fanny Burney with her embarrassed Evelina could be. I didn’t see that all the Georgian powdered wig posturing was simply a cover for the tumult that surrounded life for almost anyone — especially any middle-class woman willing to ditch the sedan chair and go for a walk in London.

The danger to one’s clothes would have been real enough. But then there were all the bumpy carriage rides and prowling highwaymen to consider, who haunted even ritziest Mayfair. This London truly was dangerously exciting, and we’re hoping to convey that excitement on our next tour. I’m grateful that we’ve had the time to map out two Mayfair tours and that we know where we’re going. I’m grateful that I now know enough about Somerset Maugham and John Galsworthy to want to know an awful lot more. But most of all, I’m grateful that we are going to dare to let writers from the eighteenth and early nineteenth centuries be enough by themselves to attract 21c customers — digitised to death and in need of stories culled from lives that were never expected to last that long, and where lowered expectations could lead to a greater relish for living itself.

It took Mike and me a full two years to craft our first tour, and, sigh, it might take this long with the second. But the focus is clear now and long swords are drawn to cut through the vast material with a precision that we hope will amaze and delight. Please stay tuned, and know that if our posts on Twitter and Instagram seem fixated on a fairly distant past, they are revealing our now, new most wonderful state of being. Besides its very real hardships, the eighteenth century is a land of strange thoughts and feelings asking to be rediscovered again and again, ready to delight and appall in equal measure.

John Gay’s Trivia: or, The Art of Walking the Streets of London reminds us not only of how much he loved visiting Burlington House in early 18c Mayfair — “There Handel strikes the Strings, the melting Strain / Transports the Soul, and thrills through ev’ry Vein” — but also that Gay probably could only visit Burlington House if a coach or sedan chair had transported  him thither: “There oft I enter (but with cleaner Shoes)” than he could wear when exploring London streets on foot. We will let Gay’s couplet speak for our certainty that you’ll enjoy tramping around Mayfair with us on our next literary tour: “O ye associate Walkers, O my Friends, / Upon your State what Happiness attends!”